The History of Print

Home » The History of Print 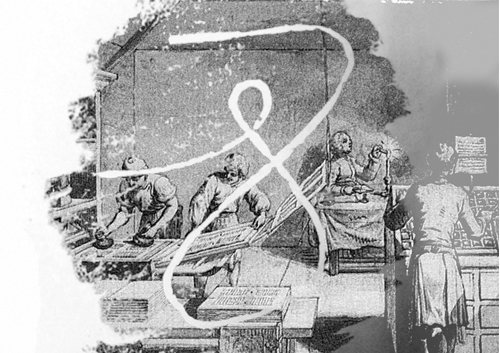 The history of print goes back to the time of Mesopotamian civilisation before 3000 BCE where round cylinder seals were used to imprint the images on the clay tablets. In other parts of the world, especially China and Egypt, wooden blocks were used to print on silk and some earlier designs were composed of floral printing in three different colours. The Harappan civilisation in the Indus Valley (currently located in Pakistan) were the first ones to use the modern techniques of printing involving printing plates during the 2000 BC. One of the plates bears 34 characters which is known to be the longest inscription done during the early periods.

In the 2nd century a Chinese man, Ts’ai Lun invented paper by using the inner barks of the mulberry tree and bamboo fibres. This secret of paper production was revealed to the Muslim world in the 8th century during the Battle of Talas near Samarkand where a number of Chinese paper makers were taken prisoners.

A copy of the Chinese version of Diamond Sutra is known to be one of the earliest samples of a printed book. This book was made using a relief printing technique in which words and images are carved onto a block of wood. The wood block was then inked and pressed against the paper surface.

The 10th Century marks the invention of a finer sheet of paper by an Arab who replaced linen for wood and bamboo.
The first movable type printing was invented by a Chinese man, Pi- Sheng in the 11th century who developed characters from hard clay. This was a huge success in the print technology due to the use of soft material.

Paper-making reached Europe in the late 12th century. It is known that Johannes Gutenberg was the first one to develop the movable type printing technology in Europe. One of Gutenberg’s greatest achievements is in fact the invention of the printing press which requires a steady downward pressure for the printing process. Gutenberg also applied his goldsmith skill in the creation of different moulds for characters and developing the alloys in which to cast them. In 1444 Gutenberg opened his first printing shop. “Poems of the last judgment and “Calendar for 1448” are among his first publication from his printing press. Gutenberg also manufactured an oil-based ink which was considered more durable than the standard water-based inks.
Thus Gutenberg revolutionised the system of communication and book production through his ingenious efforts in the print industry.

In 1461 the first illustrated book “Edelstein” was printed by Albrecht Pfiste which featured a number of different woodcuts.
The year 1465 marked the invention of dry point engravings by a German artist. In this technique an image is incised on a copper plate using a sharp pointed metal. The first book is known to be printed in Rome by Ulrich Haan in 1467.

In 1476, William Cauxton set up the first printing press in England. Cauxton was also the first English retailer of printed books.

In 1502, Aldus Manutius was the first printer to print small portable sized books which could easily be carried anywhere unlike the books at those times which were quite bulky and large. He was also the first one to use Italic font in his books which was designed by Francescop Griffo.

The first American paper mill was established in 1690. In 1812 Friedrich Gottlob Koenig and Andreas Friedrich Bauer invented the first cylinder press which was much faster than the existing flatbed press. Their first customer was John Walters of The Times. The first Time issue printed by this new printing machine was published in 1814. The machine was known to print 1100 sheets per hour which was lightening speed back then!

The printing process was further speed up by the invention of rotary printing press by Richard Mark Hoe in 1843. In this printing process the impressions are carved around cylinder so as to print long continuous sheets of paper, cardboard and even plastic.

We’ll be carrying on this timeline so watch this space.